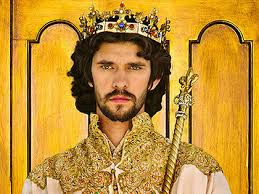 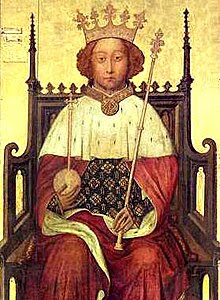 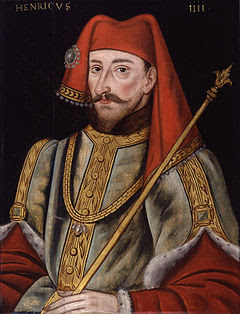 KING HENRY IV, WHO USURPED THE THRONE OF RICHARD II AS
HENRY BOLINGBROKE, HIS COUSIN
http://en.wikipedia.org/wiki/Henry_IV_of_England

RICHARD OF YORK, CLAIMANT TO THE ENGLISH THRONE
AND ONE OF THE MAIN LEADERS OF THE WAR OF ROSES
[WAR BETWEEN THE HOUSES OF LANCASTER AND YORK,
BOTH DESCENDANTS OF KING EDWARD III]
[HISTORICAL IMAGE]
http://en.wikipedia.org/wiki/Richard_of_York,_3rd_Duke_of_York 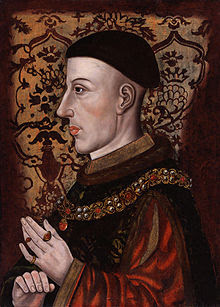 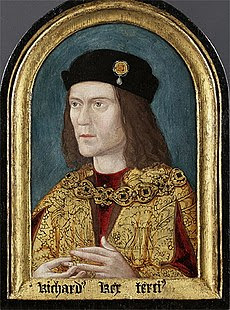 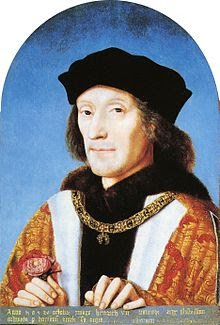 KING HENRY VII, THE FIRST TUDOR KING
AND FOUNDER OF THE TUDOR DYNASTY
HISTORICAL IMAGE
http://en.wikipedia.org/wiki/Henry_VII_of_England
THE WARS OF THE ROSES/THE HOUSE OF YORK/REACTION
ON ENCYCLOPAEDIA BRITANNICA’S CHANGES IN THEIR
ARTICLE AFTER MY COMMENTS
Dear Readers,
Recently I wrote to Encyclopaedia Britannica about their
article ”The House of York”, adding some critical remarks.
Reasons?
Two.
FIRST:
Encyclopaedia Britannica called the overthrow of King Henry VI
by the son of Richard, Duke of York, the later King Edward IV,
after his victory in the Battle of Towton, an ”usurpation”.
In my letter to Encyclopaedia Britannica,  I pointed out,
that although it was a deposing of King Henry VI, it was no
”usurpation”, because of the York superior claim to
the throne, by descending from maternal side from
King Edward III’s second son, Lionel of Antwerp, Duke of
Clarence, while the Lancasters descended from the third
son of King Edward III, John of Gaunt.
King Richard II  appointed the grandson of Lionel
of Antwerp, Roger Mortimer, 4th Earl of March,
[the son of Lionel’s daughter Philippa Plantagenet,
who married Edmund Mortimer, 3th Earl of March,
as his heir presumptive
to the throne, a right which passed through his son, Edmund
Mortimer, 5th Earl of March.
Were Richard II not usurped by his cousin, Henrt Bolingbroke
[the later King Henry IV, and Richard II died childless, Edmund
Mortimer should be King of England.
And Edmund Mortimer was the maternal uncle
of Richard, Duke of York, who was the son of Edmund Mortimer’s
sister, Anne Mortimer.
Since Edmund Mortimer died childless, Richard of York inherited
his vast estates and the title of Earl of March [he became the
6th Earl of March], which he passed
to his son, the later Edward IV.
So when Edward IV overthrew Henry VI, it was a deposal, not
usurpation.
SECOND
When mentioning the Act of Accord of 1460, by which
Richard of York and Parliament agreed, that Richard of York
would succeed Henry VI after his death [and thus disinheriting
Edward of Westminster, the son of Henry VI, which infuriated
of course his mother, Margaret of Anjou], which was confirmed
by Richard’s superior claim to the throne,
Encyclopaedia Britannica made a remark about the
”weakness” in this claim by deriving from females.
I challenged that by pointing out, that four English Kings
either inherited the throne from the female line, or
claimed the crown from the female line.
REACTION OF ENCYCLOPAEDIA BRITANNICA
I received an interesting and partly satisfying reaction
from Encyclopaedia Britannica with some changes
in the article
This was their reaction:
”Dear Astrid Essed,

Thank you for your e-mail.

OK, we’ve made a couple of small changes to this article, based on the reader’s message.

“Changing ‘usurped’ to ‘overthrown’ to acknowledge the contention of the legitimacy of the York claim based on the ‘Mortimer Claim.’ Also mentioned the 14th century practice among the nobility of privileging heir-male claims over heir-general claims.”

The revised article can be seen at http://www.britannica.com/EBchecked/topic/653692/house-of-York.

End of the reaction of Encyclopaedia Britannica
MY COMMENT AND REACTION
Of course I’ve appreciated the change in the article of ”usurpation”
[the overthrow of King Henry VI] to ”overhrown”, as some additons,
pointing out the ”Mortimer Claim” in the text. [as was the claim
of Richard of York from his maternal side, since his great grandmother
Philippa Plantagenet, daughter of Lionel of Antwerp, married
Edmund Mortimer and their descendants had that superior claim
to the throne]
However I was not content about the fact, that they didn’t change
their remark about the ”weakness” of the right through females
on the throne and therefore I wrote them the following letter.
Travel with me to the past again.
Astrid Essed
TO THE EDITOR TEAM OF BRITANNICA CUSTOMER SERVICE
Dear Sir/Madam
Thanks very much for your reaction and especially
for the changes in your article about the House of
York, which I have criticized for two points:
Your use of the word ”usurpation” about the ascendancy
of King Edward IV [after the succesful victory at Towton
in 1461], which deposed King Henry VI.
And secondly, your reference to the ”weakness” of
the claim to the throne of Richard of York [father to King Edward IV]
from females,
having a superior claim from his mother”s side, descended from
Lionel of Antwerp, the second son of King Edward III, while
the Lancaster Kings descended from John of Gaunt, the third
son of King Edward III
See my comments
http://www.astridessed.nl/the-wars-of-the-roseslancaster-and-yorkusurpation-and-the-right-to-the-throne-by-femalesletter-to-encyclopaedia-britannica/
´´USURPATION´´ OF EDWARD IV
Now it is an honour to me, that your team has made changes in your article
and I will emphasize that these are no small changes,as you write,  but crucial.
Because it is crucial to explain to your readers, that
Edward IV did overthrow the House of Lanccaster,
BUT NOT USURP THE THRONE,
because of his father´s superior claim according to his descendance
of Lionel of Antwerp.
WERE IT NOT FOR THE USURPATION (For that was a real one)
OF THE LANCASTERS (Richard II´´s cousin Henry Bolingbroke, son
of John of Gaunt and the later King Henry IV), RICHARD OF YORK´S
UNCLE, EDMUND MORTIMER ¨(Richard II´s heir presumptive, inherited
from his father, Roger Mortimer) HAD BEEN KING OF ENGLAND
AND AFTER HIS DEATH RICHARD OF YORK, SON OF HIS SISTER,
ANNE MORTIMER.
You write in your new version ´´overthrown´´ instead of
´´usurpëd´´
´´ House of York, younger branch of the house of Plantagenet of England. In the 15th century, having overthrown the house of Lancaster, it provided three kings of England—Edward IV, Edward V, and Richard III—and, in turn defeated, passed on its claims to the Tudor dynasty.´´
http://www.britannica.com/EBchecked/topic/653692/house-of-York
So far, so good.
Thanks.
Also I am very content about your emphasizing of the Mortimer
claim to the throne
You write
´´Edward, dying childless, passed on the dukedom to his nephew Richard (whose mother was a descendant of Edward III’s second surviving son, Lionel, Duke of Clarence). Richard, 3rd Duke of York´´
and
´´Yet it was founded upon strict principles of lineal descent, for the 3rd Duke of York was descended from Lionel, Duke of Clarence, the second surviving son of Edward III, whereas the house of Lancaster came of John of Gaunt, a younger brother of Lionel.´´
VERY GOOD.
SOME ADDING COMMENTS OF CRITICISM
THE USURPING LANCASTER KINGS
However I think it is pitiful, that you didn´t explain,
to your readers, that the ´House of Lancaster itself not only had
a lesser claim to the throne, but came into power
by means of usurpation of King Richard II, as I pointed
out in my earlier letter to you
http://www.astridessed.nl/the-wars-of-the-roseslancaster-and-yorkusurpation-and-the-right-to-the-throne-by-femalesletter-to-encyclopaedia-britannica/
This is also confirmed in the book of Alison Weir about the
Wars of Roses.
I quote Weir
´´‘Certainly Henry IV and the Lancastrian Kings, who succeeded
him, were usurpers”

THE USURPING DYNASTY, PAGE 40
ALISON WEIR
LANCASTER AND YORK, THE WARS OF THE ROSES
http://books.google.nl/books?id=isN2jgYtHRcC&q=Margaret+of+Anjou&source=gbs_word_cloud_r&cad=6#v=onepage&q&f=false
I repeat, were Richard II not usurped  by Henry Bolingbroke
the maternal uncle of Richard of York, Edmund Mortimer
should be king, and subsequently, Richard of York.
However, with you I think, that he would never have
claimed the throne, if politics were not escalated by
King Henry VI´s weak rule, as Queen Margaret´s ill
political insight as her favouritism of uncapable and
corrupt advisors as the Duke of Suffolk and later, Somerset.
RIGHT TO THE THRONE BY FEMALES
Now another point, that I like to add is your´
comment on the descendance through
the female line.
About the legitimacy of the inheritance through females
you wrote
´´One thing that might possibly have been considered an element of weakness in Richard’s claim was that it was derived through females—an objection actually brought against it by Chief Justice John Fortescue´´
And after my criticism, that inheritance through female
lines did not ´´weaken´´ a claim, you have added
´´(probably a reflection of the increasingly common practice among the English nobility of passing on their estates to a male heir)´´
Now your addition is an explanation of Chief Justice
Fotescue´s reaction and of course that is Medieval
thinking about the rights and position of women.
But in my letter to you I pointed out to you,
that whatever may have been the prejudices
against women´s roles and their passing their
inheritance on their offspring , men used those
rights (which were also acknowledged) whenever
it suited them, since there was (according to the rights
to the throne) no Salic Law in England.
That men were not comfortable by descendance
from female line is a whole other matter.
But it was legal as valid.
Otherwise, Richard of York could not have made
his maternal claim to the throne and he could not
have been Henry VI´s heir presumptive ¨(after the
death of Henry´s uncle Humphrey, Duke of Gloucester)
untill the birth of Henry and Margareta of Anjou´s son,
Edward of Westminster.
Here come, again, four strong examples of
Kings or men of high nobility, who claim
their rights from a woman.
King Henry II ¨(father to Richard Lion Heart and King John I,
Lackland and son of Queen Maud, who was the heir
of her father, King Henry I by the oath he made the barons
swear to acknowlegde her as his heiress. From his
mother´s right to the throne, he inherited the English throne)
Stephen of Blois, the great rival of Queen Maud during
the civil war (the ´´Anarchy´´), who expelled Queen Maud
and took the throne.
He based his right (apart of ´´preservation of order´´) on
the fact, that he was a MATERNAL grandson of William
the Conqueror.
Edward III, who based his claim on the French throne
on the fact, that he was the closest kin of the late
King Philip IV, his MATERNAL grandfather.
One of the direct causes to the Hundred Year´s war with
France.
And last, but not least
THE LANCASTER CLAIM TO THE THRONE.
Realising, that Richard of York´s maternal
uncle, Edmund Mortimer had a superior
claim to the throne (and was also Richard II´s heir
presumptive), King Henry IV alleged that his MATERNAL
ancestor, Edmund Crouchback, the son of
King Henry III and younger brother to the later King
Edward I.
According to the Lancastrians, Edmund Crouchback was
in reality the eldest son of King Henry III, but overlooked
because of his physical deformacy.
That would made Edward I, and subsequently
Edward II, Edward III and Richard II to usurpers.
Regrettably to the Lancastrians, there was no proof,
whatsoever, that Edward I was not the eldest son
of King Henry III.
So this Lancaster claim was null and void.
However it´s interesting that four Kings or seizers
to the throne (Stephen of Blois and Henry IV) based
themselves on claims by females.
And it would have been nice, when you had added to your
article, that not only female rights (even if they were
overlooked) were as valid as men, but that subsquently
Stephen of Blois, King Henry II, Edward III as Henry IV had
either inherited from female line or based their claim
on it.
See more extended
http://www.astridessed.nl/the-wars-of-the-roseslancaster-and-yorkusurpation-and-the-right-to-the-throne-by-femalesletter-to-encyclopaedia-britannica/
If you would consider to do some changes yet, I would
appreciate that.
But thanks to your additions anyway.
I will place this comment on your website and
will send it to your feedback page.
See also
http://www.astridessed.nl/?s=Wars+of+the+Roses
http://www.astridessed.nl/?s=The+Wars+of+the+Roses
Kind greetings
Astrid Essed
Amsterdam
The Netherlands