OVER 3OO HOLOCAUST SURVIVORS AND THEIR DESCENDANTS
CONDEMN ISRAEL´S MASSACRE OF PALESTINIANS
IN GAZA/LETTER OF SOLIDARITY
AND APPRECIATION
STATEMENT OF APPRECIATION AND SOLIDARITY WITH
YOUR COURAGEOUS LETTER OF CONDEMNATION
OF THE ISRAELI GAZA OFFENSIVE ´´PROTECTIVE EDGE´´
Dear Survivors and Descendents of Survivors
I, Astrid Essed, salute you, who have survived one of the greatest
crimes of humanity ever committed.
Not only people were murdered in cold blood, because of their
descent, also people were dehumanized and humiliated.
A strong warning for Mankind, to which xenophobia and racism
can lead.

END_OF_DOCUMENT_TOKEN_TO_BE_REPLACED 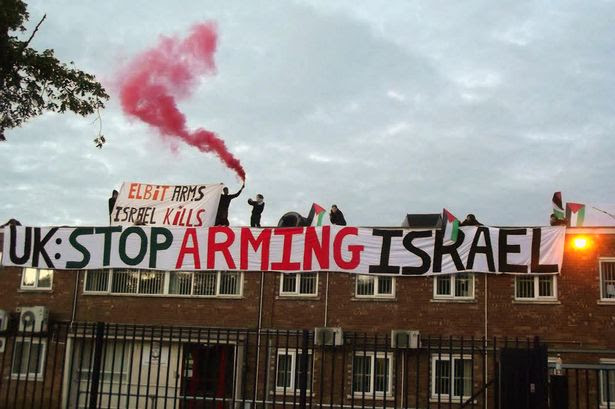 GAZA SOLIDARITY ACTION/STATEMENT OF SOLIDARITY WITH THE
ELBIT ROOFTOP OCCUPIERS/NO ARMING
ISRAELI CRIMINAL  REGIME OF OCCUPATION
Dear Fighters of Justice,
Hereby I express my solidarity with your courageous
occupation of UAV Engines factory, which, as a wholly
owned subsidiary of the Israeli military company, Elbit Systems,
is fully responsible for the Israeli warcrimes and crimes of
humanity in Gaza.
It´s a shame and disgrace that your government as well as mine
are still cooperating with the murderous IDF gang, your
government,  by suppyling arms to Israel  and mine by cooperating
in military trainings and exercises.
EU as a whole turns a blind eye to Israel´s crimes.
Therefore all of them have  blood on their hands.
But we will not let them get away with this and go on with the struggle,
in solidarity, untill the Palestinian people is really free.
Israel, the occupying power, has to withdraw from the Palestinian
territories, dismantle the illegal settlements, break down
the illegal Wall and acknowledge the Palestinian right of return.
Dismantling of the zionist apartheid State!
One free Palestinian State for all its inhabitants,
Israeli, Palestinians and others.
INTIFADA, INTIFADA, FOR A FREE PALESTINE!
In solidarity
Astrid Essed
Amsterdam
The Netherlands

END_OF_DOCUMENT_TOKEN_TO_BE_REPLACED

TO MRS C ASHTON
HIGH REPRESENTATIVE OF THE UNION FOR FOREIGN AFFAIRS AND SECURITY POLICY
EU RELATION WITH ISRAEL IN THE LIGHT OF THE ISRAELI
ATTACK ON GAZA ”PROTECTIVE EDGE”
”The Union is founded on the values of respect for human dignity, freedom,
democracy, equality, the rule of law and respect for human rights, including
the rights of persons belonging to minorities. These values
are common to the Member States of a society in which pluralism,
tolerance, justice, solidarity and equality between women and men
prevail”
Article 2, Lisbon Treaty
”The Union’s action on the international scene shall be guided by the principles which have
inspired its own creation, development and enlargement, and which it seeks to advance in the wider
world: democracy, the rule of law, the universality and indivisibility of human rights and
fundamental freedoms, respect for human dignity, the principles of equality and solidarity, and respect for the principles of the United Nations Charter and international law.”
Article 21, Lisbon Treaty
http://eur-lex.europa.eu/legal-content/EN/TXT/PDF/?uri=OJ:C:2008:115:FULL&from=EN
Dear Mrs Ashton,
At the moment I am writing  to you, at least 1437 Palestinians,
in Gaza have been killed, since Israel started its military
operation ”Protective Edge”. [1]
Among those killed were 342 children.
According to sources in Gaza’s Ministry of health, 80
per cent are civilians. I fear this number will have
increased at the moment you read this letter.
The last horror I learnt was the Israeli attack on a UN School,
killing 15 and wounding 125. [2]
On Israeli side, there were three civilian victims,  two Israeli  and a
Thai worker.
No less deplorable, but, like the conflict, assymetric.
Those killings, with the high civilian toll, are not only horrible,
but stem chiefly from Israeli indiscriminate attacks and
extrajudicial killings [3], which are serious breaches of
International Humanitarian Law, failing to make
a clear distinction between combatants and non combatants.[4]

END_OF_DOCUMENT_TOKEN_TO_BE_REPLACED

Introduction:
Dear Readers,
Undoubtedly you are being informed of  the recenty started discussion by the Western media and polticians, about the real or alleged contribution of the Israeli prime-minister Sharon to peace in the Middle-East-conflict.
Immediate cause is the execution of the Gaza-disengagement-plan last year, by which the Gaza-settlements were evacuated, like four settlements on the Westbank.
In the underlying article I’ll try to emphasize on the fact, that according to my opinion, either the Gaza-disengagement-plan, or any other political and military measure of Sharon has contributed in any respect on a serious and just peace in the Middle East.
Further I’ll pay special attention to another very relevant aspect of the political-military carreer of Sharon, which is threatened to be greatly ignored in the discussion about his real or alleged peace-contribution, namely the human rights violations and war-crimes, for which he was responsible during his political and military career
I think it is of utmost importance, that those human rights violations and war-crimes, which testify of the lack of respect for the most elementary human rights, are not forgotten
END_OF_DOCUMENT_TOKEN_TO_BE_REPLACED

DISASTER OVER PALESTINE/THE REFUGEE PROBLEM AND THE IDEOLOGY OF TRANSFER

In contrary with the allegations of zionist non-deniers, the expulsion of the Palestinians in 1948 and 1967 was no ad hoc war-crime, but a yearlong deliberate planned strategy