Huchon’s world fell apart in 1326/27, when Queen Isabella and Roger Mortimer invaded the realm.  His great-uncle the king was deposed and imprisoned.  His grandfather the earl of Winchester was executed, and mere weeks later his father Hugh Despenser the Younger also, and horribly.  His mother Eleanor de Clare was imprisoned.  Three of his five younger sisters were forcibly veiled as nuns, despite being mere children at the time (the two who escaped were fourteen-year-old Isabella, already married to the earl of Arundel’s son, and Elizabeth, only a baby or still in utero).  Huchon himself remained at his father’s great South Wales castle of Caerphilly (built in the 1270s by Huchon’s maternal grandfather Gilbert ’the Red’), which his father and great-uncle had left in early November 1326, leaving numerous possessions and a great deal of money behind under Huchon’s care.  They were captured on 16 November, and Hugh was executed eight days later.  At some point probably in November, Isabella and Roger Mortimer ordered Caerphilly to be besieged, offering free pardons on several occasions to the garrison inside and promising that their lives would be spared and their goods not forfeited if they surrendered, but pointedly excluding Huchon by name: in short, they wanted to have him executed.  It is hard to discern any real reason for this beyond vindictiveness and a desire to execute the third man in England named Hugh Despenser.  Huchon was only seventeen or eighteen at the end of 1326 and had committed no crime except to be the eldest son and heir of the loathed Hugh the Younger.  Fortunately for the young man, the Caerphilly garrison under the command of Sir John Felton refused to give him up to execution, and held out under siege until 20 March 1327, when Isabella and Roger gave in and promised to spare Huchon’s life.  The garrison thus finally surrendered, and Huchon received a “[p]ardon to Hugh son of Hugh le Despenser the younger of the forfeiture of his life, without restitution of his lands.”  [Patent Rolls1327-30, p. 14.]  Huchon is briefly mentioned in the Anonimallechronicle at Christmas 1326: En cel men temps Hughelyn le Despenser ficz au dist sire Hugh se tint el chastel de Kerfily, ‘At this same time Hughelyn le Despenser son of the said Sir Hugh remained at the castle of Caerphilly’.

Roger Mortimer and Isabella kept their word and spared Huchon’s life, but he was imprisoned for the rest of their regime.  (On what charge, I have no idea.)  At first Huchon was in the custody of Roger Mortimer himself – perhaps at Wigmore or at Ludlow, I don’t know – and on 15 December 1328 was transferred to prison at Bristol Castle, where his jailer was Sir Thomas Gurney, who was convicted by parliament two years later of the murder of Edward II at Berkeley Castle in September 1327. [Close Rolls 1327-30, p. 352.]  This surely can’t have been a pleasant experience for Huchon.  His great-uncle Edmund of Woodstock, earl of Kent – youngest son of Edward I and only about seven or eight years older than Huchon himself – was arrested in March 1330 and convicted of treason after attempting to free the supposedly dead Edward II from captivity.  Kent’s confession as recorded in the chronicle of the royal clerk Adam Murimuth names Huchon as one of his adherents: Kent stated that one Sir (or Brother) William Cliff “came unto him from Hugues le Despenser, who told him that he would be well pleased to be with him; for he said that he [Kent] would be sure of the deliverance [of Edward II] in short time.”  [Adae Murimuth Continuatio Chronicarum, ed. E. M. Thompson, pp. 255-7.]  William Cliff, from my own research, appears to have been the man of this name who was a clerk of both Edward II and the Despensers and whom Huchon’s father Hugh the Younger appointed as his attorney in July 1322.  Whether Huchon truly believed that his great-uncle Edward II was still alive in 1330 is impossible to know, but certainly he must have been more than willing to do anything which might bring down the regime of Isabella and Roger Mortimer.

Huchon was finally released from prison in or a little before September 1331, a few months after Edward III took over the governance of his own realm, and in April 1332 was granted permission to go on pilgrimage to Santiago de Compostela in Spain.  [Patent Rolls 1330-4, pp. 246, 273, 277.]  He was now about twenty-four or so.  Life must have been strange for him in many ways: he was a close kinsman of Edward III (his mother Eleanor de Clare was the king’s much older first cousin), of high birth and related to most of the nobility of England, but was also the son and grandson of two notorious and despised traitors, whose name he bore.  Edward III, not a vindictive man or one to visit the sins of the father on the son, granted him various manors throughout the 1330s in fulfillment of 200 marks of land he had promised him (see e.g. Patent Rolls 1330-4, pp. 267, 377, 462). The Despenser lands of Huchon’s grandfather were forfeit to the Crown as Hugh Despenser the Elder had been executed for treason, and remained so until restored by Richard II to Hugh the Younger’s great-grandson Thomas in 1397, but Huchon was heir to his mother Eleanor de Clare and her vast inheritance.  When Eleanor died on 30 June 1337, aged forty-four, her lands passed by right to Huchon, who was then said to be twenty-six, twenty-eight or twenty-nine.  [Calendar of Inquisitions Post Mortem 1336-46, pp. 78-80.]  The most important part of the inheritance was the great lordship of Glamorgan in South Wales.  Huchon was a knight and soldier: he fought for Edward III at Halidon Hill in 1333 and at the battle of Morlaix in 1342, where his younger brother Edward – second of the four surviving sons of Hugh the Younger and Eleanor de Clare – was killed.

In 1341, Huchon received permission from Pope Benedict XII to marry Elizabeth, daughter of William Montacute, earl of Salisbury and close friend of Edward III [Calendar of Papal Letters 1305-41, p. 553].  Permission was needed as Elizabeth’s first husband Giles Badlesmere, who died in 1338, was related to Huchon in the third degree of affinity; Giles’ mother Margaret de Clare was the first cousin of Huchon’s mother Eleanor de Clare.  Elizabeth’s parents William Montacute and Katherine Grandisson married in about 1327, and their eldest son William was born in 1328, so Elizabeth can hardly have been more than nine when her first husband died and twelve when she married Huchon, who was about twenty years her senior.  One of Elizabeth’s sisters married Huchon’s nephew Edmund Fitzalan, son of his sister Isabella and Richard Fitzalan, earl of Arundel, and another married Roger Mortimer’s grandson Roger Mortimer, second earl of March, and was the mother of Edmund, third earl.  Sadly, the marriage of Huchon and Elizabeth remained childless.

Hugh ‘Huchon’, Lord Despenser, lord of Glamorgan, died on 8 February 1349 at the age of about forty, possibly of the Black Death which was then raging through England, though this is uncertain and he may have died of natural causes.  [His Inquisition Post Mortem is in Calendar of Inquisitions Post Mortem 1347-52, pp. 328-342.]  As he had no children, his heir when he died was his nephew Edward (1336-1375), eldest of the four sons of his second brother Edward (killed at the battle of Morlaix in 1342): “Edward son of Edward le Despenser brother of the said Hugh, aged twelve years and more, is his heir.”  The younger Edward Despenser was also the heir of Huchon’s long-lived aunt Aline, Lady Burnell, when she died in 1363.  Huchon’s widow Elizabeth Montacute later married her third husband Sir Guy Bryan, and had children with him, so perhaps Huchon was infertile.

Below: the tomb of Huchon and Elizabeth Montacute can be seen to this day in Tewkesbury Abbey, Gloucestershire,which happily survived the Dissolution.  Huchon’s parents, his uncle the earl of Gloucester (d. 1314), grandfather Gilbert ’the Red’, nephew Edward (d. 1375) and great-nephew Thomas, earl of Gloucester (d. 1400) are also buried in the abbey, along with numerous other members of the de Clare and Despenser families. 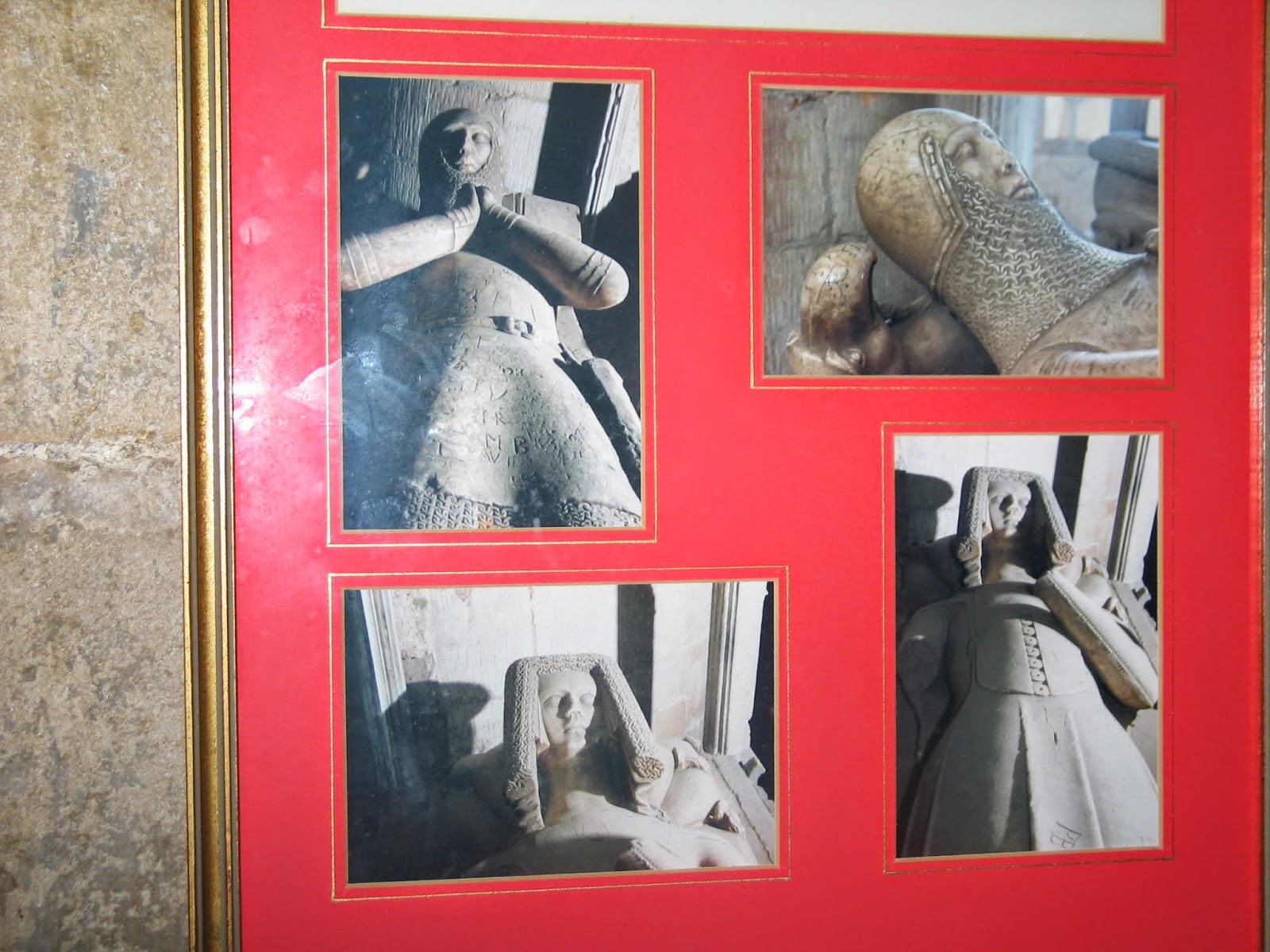 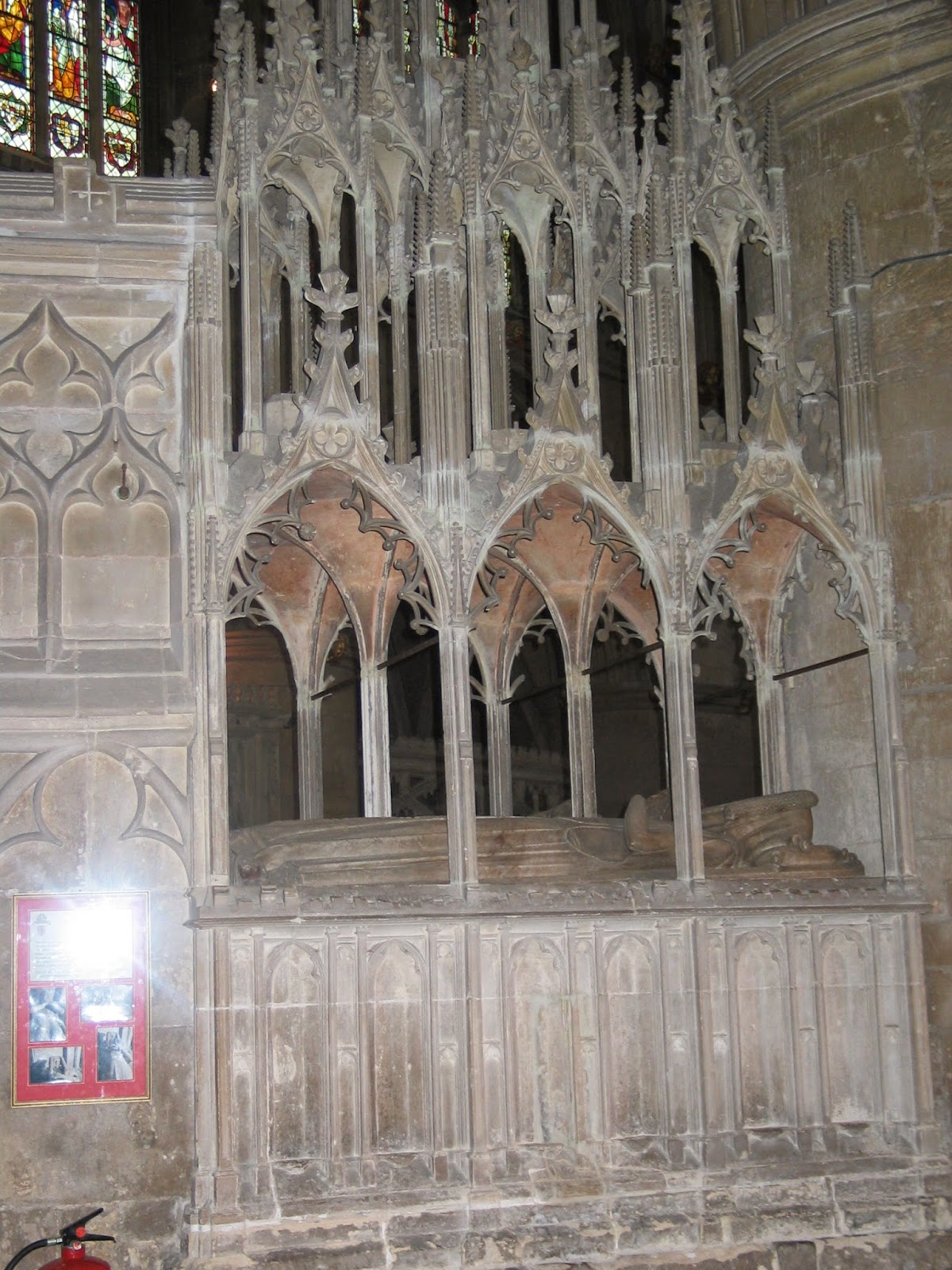