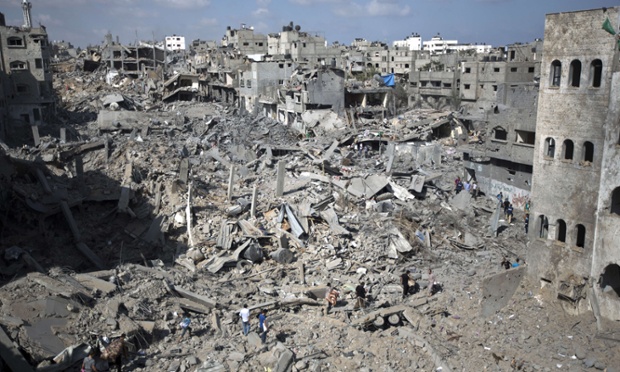 DESTRUCTION IN GAZA
HOLOCAUST SURVIVORS CONDEMN ISRAEL´S
MASSACRE IN GAZA/END TO ISRAELI
OCCUPATION AND COLONIZATION
Dear Readers,
Recently I wrote a letter of solidarity and appreciation to the
International Jewish Anti-Zionist Network  because of
the courageous Letter of Holocaust survivors and their descendants
condemning the Israeli massacre of Palestinians in Gaza and the
ongoing occupation and colonization of historical Palestine.
In the Letter, the names of the people who signed, were mentioned.
I think they deserve to be mentioned in text, so hereby, under
my letter of appreciation, I name them.
Astrid Essed
Amsterdam
The Netherlands
STATEMENT OF APPRECIATION AND SOLIDARITY WITH
YOUR COURAGEOUS LETTER OF CONDEMNATION
OF THE ISRAELI GAZA OFFENSIVE ´´PROTECTIVE EDGE´´
Dear Survivors and Descendents of Survivors
I, Astrid Essed, salute you, who have survived one of the greatest
crimes of humanity ever committed.
Not only people were murdered in cold blood, because of their
descent, also people were dehumanized and humiliated.
A strong warning for Mankind, to which xenophobia and racism
can lead.
Alas, Mankind didn’t learn much of those horrors, because everywhere
in the world, massacres and human rights violations go on and on.
One of the examples of serious human rights violations and
crimes against humanity [Gaza Blockade] is the zionist State
of Israel, where, with a false appeal on the Holocaust to scare
people, and the wrong use of antisemitism to colonize Palestine,
on a daily basis warcrimes and human rights violations are committed.
Your impressive Letter to protest against the latest Israeli
offensive in Gaza ´´Protective Edge´´ has really touched and
impressed me.
Therefore, by this letter, I want to utter strongly my
solidarity with you and my appreciation for
your courageous statement and involvement with
the oppressed people of Palestine.
Especially you, who have survived the horror of horrors can
feel, like no one else, what oppression, humiliation and
dehumanization really is.
I thank you and salute you.
May God be with you.
In deep respect
Astrid Essed
Amsterdam
The Netherlands
LETTER OF THE SURVIVORS OF THE HOLOCAUST AND THEIR DESCENDANTS/
NAMES OF THE SURVIVORS OF THE HOLOCAUST AND THEIR DESCENDANTS, WHO
SIGNED THE LETTER

JEWISH SURVIVORS AND DESCENDANTS OF SURVIVORS

AND VICTIMS OF NAZI GENOCIDE UNEQUIVOCALLY

CONDEMN THE MASSACRE OF PALESTINIANS IN GAZA

As Jewish survivors and descendants of survivors and victims of the Nazi genocide we unequivocally condemn the massacre of Palestinians in Gaza and the ongoing occupation and colonization of historic Palestine. We further condemn the United States for providing Israel with the funding to carry out the attack, and Western states more generally for using their diplomatic muscle to protect Israel from condemnation. Genocide begins with the silence of the world.

We are alarmed by the extreme, racist dehumanization of Palestinians in Israeli society, which has reached a fever-pitch. In Israel, politicians and pundits in The Times of Israel and The Jerusalem Post have called openly for genocide of Palestinians and right-wing Israelis are adopting Neo-Nazi insignia.

Furthermore, we are disgusted and outraged by Elie Wiesel’s abuse of our history in these pages to justify the unjustifiable: Israel’s wholesale effort to destroy Gaza and the murder of more than 2,000 Palestinians, including many hundreds of children. Nothing can justify bombing UN shelters, homes, hospitals and universities. Nothing can justify depriving people of electricity and water.

We must raise our collective voices and use our collective power to bring about an end to all forms of racism, including the ongoing genocide of Palestinian people. We call for an immediate end to the siege against and blockade of Gaza. We call for the full economic, cultural and academic boycott of Israel. “Never again” must mean NEVER AGAIN FOR ANYONE!

Other relatives of survivors