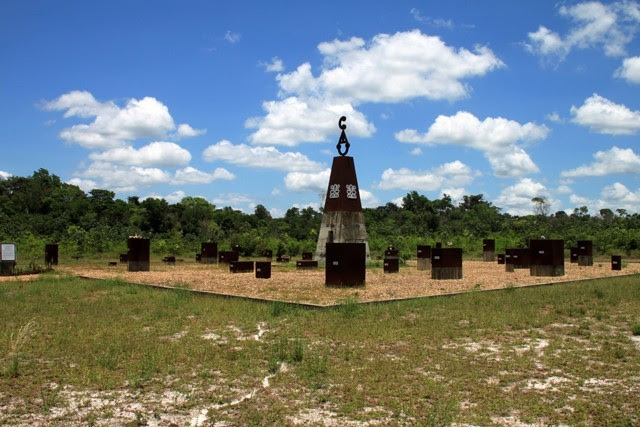 MOIWANA MONUMENT/IN REMEMBRANCE OF THE MASSACRE
IN THE MARROON VILLAGE MOIWANA UNDER THE RESPONSIBILITY
OF EX DICTATOR AND ARMY COMMANDER IN CHIEF, D. BOUTERSE
http://en.wikipedia.org/wiki/Moiwana

IN REMEMBRANCE OF THE VICTIMS OF
EX DICTATOR AND CHIEF COMMANDER OF THE
ARMY, D. BOUTERSE
KILLED, BUT NOT FORGOTTEN
NO IMPUNITY FOR THE KILLERS
http://www.astridessed.nl/bouterse-wins-general-elections-in-surinameslap-in-the-face-of-human-rightsletter-to-the-editor/

[16]
”Hira proposed that Bouterse submit to a comprehensive interview with him regarding all political violence he’s been involved in and the decision-making behind it. Hira would like time to research the topic with a team and prepare questions that he will submit to Bouterse prior to the interview. He would then prepare a report on his research and the entirety of Bouterse’s testimony which would be presented to the DNA president and be made available for public download.”
LOOP NEWS SERVICEBOUTERSE AGREES TO COMPREHENSIVE INTERVIEW ON DECEMBER MURDERShttp://www.loopsuriname.com/content/bouterse-agrees-comprehensive-interview-december-murders
[17]