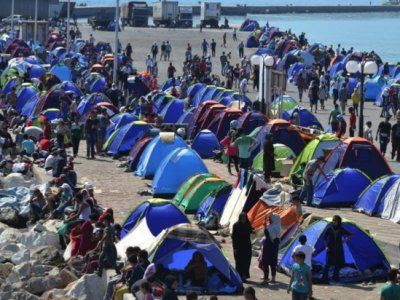 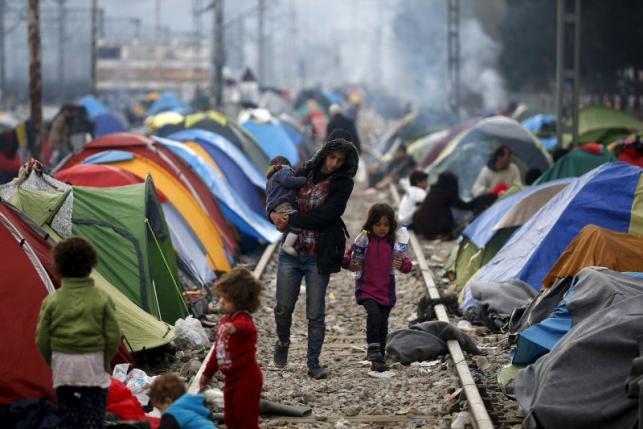 What I witnessed in Moria shocked me to the core. Hugely overcrowded with a lack of sanitation and drinking water, the camp suffers from infestations of mice and rats. When I was there almost 7,500 people were jammed into a camp with an official capacity of 3,100.”

ANOTHER WINTER OF DISCONTENT ON THE GREEK

Severe overcrowding and dire living conditions are making the camps, especially on the islands, extremely dangerous places for everyone.

Women, children and people fleeing persecution because of their sexual orientation or gender identity are even more exposed to security and safety risks.

“I don’t feel safe or comfortable in the tent with…strangers. I leave the camp early in the morning and then I return at night”, Maysa*, 25, from Syria told us when we spoke to her in Vathy camp on Samos.
The camp is designed for 640 people, but is now cramped with more than 3,800, most of them living in small tents.

Since March 2017, Amnesty International has spoken to more than 100 women and girls who have fled their homelands, and who are living in camps and flats on the Greek islands or on mainland Greece.

Too scared to take a shower

They told us that everyday activities such as taking a shower or going to the toilet had become dangerous missions, as many facilities in the camps do not have locks. Moreover, there are not enough toilets and showers for them in a women-only area. Poor lighting in the camp makes fetching water or simply walking around at night stressful and risky.

“[The] shower in the camp is cold and there is no lock. Men walk in when you are inside. There are no lights in the toilets. At night, sometimes I go to the toilet with my sister or pee in a bucket”, said Adèle* who also lived in Vathy camp on Samos.

Many of the women enduring the awful conditions are still trying to come to terms with the trauma of past abuse. For such women, the insecurity and dangers they experience in Greece are a constant reminder of the violence they sought to escape.

“Refugees need protection. If the Greek government cannot take care of us, let us go. Don’t keep us here”, said Yvette* from Cameroon when we met her in Moria camp on Lesvos.

“I don’t want anyone to know about me”

Women persecuted in their countries because of their sexual orientation or gender identity told us that they feel at a greater risk. Simone*, a 20-year-old lesbian woman, left her country after being subjected to violence, including rape. She said that her family severely beat her when they found out she was lesbian. On Samos she still found herself at risk.

“Here I feel very nervous because I am sharing the container with four men I don’t know. I don’t want anyone to know about me. I stay all day outside the camp and come back only at night, but I don’t sleep well”, Simone said.

Since 20 March 2016, asylum-seekers arriving on the Greek islands have not been allowed to move onto mainland Greece. This is because of an agreement between the EU and Turkey, dubbed the EU-Turkey deal, that requires they are returned to Turkey.

People with family reunification claims, most of whom are women or individuals who are considered “vulnerable” according to Greek law, are meant to be exempted from staying on the islands. In theory, they should quickly be transferred to mainland Greece.

But the reality is different. Officers and medical staff in the camps do not always have the skills or time needed to identify those who should be sent to mainland Greece. And even when people are identified, they have to wait for several months until space is found for them on the mainland. The Greek authorities are also applying a new grading system which in effect means only those considered “highly vulnerable” are transferred.

Life on the mainland is also difficult for people seeking refuge. Women and girls in Skaramages camp outside Athens were visibly distressed when we met them. Many were afraid, particularly in the evenings, as a Syrian woman told us:

“I spend most of the time in the container because I don’t feel safe. There is a lot of alcohol in the camp and there are fights every day. I never go out at night and I don’t allow my children to stay on their own outside, even if it’s close by. The police do not intervene. They don’t want to know what’s happening here. No one is protecting us.”

In 2017 the UNCHR received reports from 622 survivors of gender-based violence stranded on the Greek islands. In almost 30 per cent of the cases the violence occurred after the person arrived in Greece. Of all the incidents registered by the agency in the country during the second half of the year, 80 per cent of the survivors were female.

Alarming though these figures are, the truth is likely even worse, as sexual violence is hugely underreported for a number of reasons. Many women and organizations supporting them told us that women are reluctant to come forward with formal complaints due to social stigma, fear of reprisal from perpetrators, lack of trust in the protection system or because they believe that they will be stuck in Greece if they report the violence.

Insufficient resources and specialized staff in camps also means that survivors of gender-based violence are not identified and therefore not provided with the protection they need. Abigail* from Cameroon had fled to Istanbul to escape domestic violence, sexual abuse and death threats at the hands of her husband. In Istanbul, she found work in a sweatshop, but was sexually abused by her employer. A smuggler helped her to cross the Aegean. When we met her, she was living in a small tent on Samos.

“I don’t manage to sleep, and I still have a lot of nightmares because of the past”, she said.

In June 2017, various Greek authorities at the national and local levels signed a protocol to coordinate the protection of refugees and asylum-seekers who are survivors of gender-based violence. The measure includes the coordination of referrals to the 40 women’s counselling centres and the 21 state-run shelters for all women survivors of violence across the country, including Greek citizens.

This is a step in the right direction, but the impact of the protocol remains very limited. Shelters can be a lifesaver for women enduring physical and psychological violence, but they are not always equipped with interpreters and the necessary services to support uprooted women.

After ten months living in shelters Ava* from Afghanistan was asked to leave, which put her under enormous pressure.
“I managed to find something but what about others?”, she told us.

One of the clear demands from Ava and the other uprooted women Amnesty spoke to in Greece, was that survivors of violence needed far better protection. Greek authorities have to increase the number of appropriately trained staff in reception camps and urban areas who can identify and prevent violence against women.

They must also ensure that women at risk can stay in shelters until they feel safe and have the means to start a new life.

Ava is still concerned about the fate of another woman she met at the shelter.

“The same day as me a woman with three children was also asked to leave. What is she going to do? I’m still worried about her.”
NOS
VLUCHTELINGENKAMP OP ;LESBOS IS ”ECHT MISERABEL”
ZEGT AMNESTY
https://nos.nl/artikel/2260531-vluchtelingenkamp-op-lesbos-is-echt-miserabel-zegt-amnesty.html
TEKST