Just one week after the dramatic events off the coast of Lampedusa, where more than 300 refugees drowned when their boat sank, the European Parliament approved the operating rules for Eurosur, the European border surveillance system. Eurosur provides in the exchange of real time images and data between EU member states and the EU border agency Frontex, gathered through surveillance of the Mediterranean using UAVs (‘drones’), ships and satellites.
Eurosur is presented as a project aimed at rescueing migrants. In reality, it’s primarily task is stopping migrants from entering the European Union. Once again, the military industry, involved in Eurosur through Research & Development-projects, finds profit opportunities in the walls of Fortress Europe.

The tragedy at Lampedusa has been far from the only deadly result of the militarization of the Mediterranean borders. Over the course of the last twenty years, more than 17000 persons diedattempting to reach Europe. On Monday 30 September, thirteen migrants drowned near Sicily.

END_OF_DOCUMENT_TOKEN_TO_BE_REPLACED

FACE THE FACES OF DEATH/THE MEDITERRAREAN TRAGEDY IS CALLED FRONTEX

Lost are the faces, because lost are the lives. Their eyes, they see no more. They see no more fear on the faces of their companions, their families, their children. Not because they fear no more but because they are no more. Free at last. See no more and feel no more. No more hate, no more denial. No more fate to not be able to get away from – as if fate were ever a destiny rather than the result of the capitalist structures, the walls of the terrorist border agency Frontex in front of the shores that can never be reached unless dying. 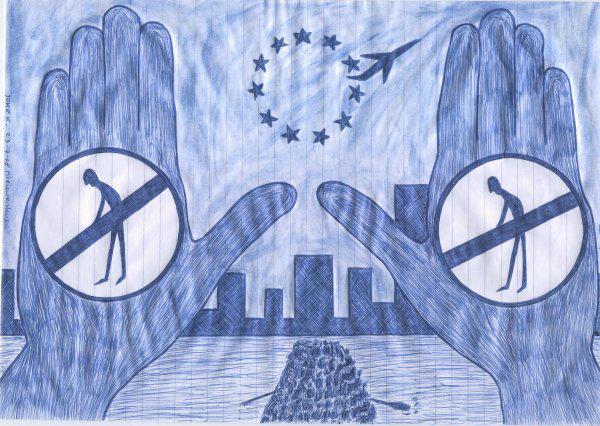 No! Fate is not the cause of corpses washing ashore. It is the crime of the European states. Fate is not the reason for leaving all of all behind in search for a life non-existent. It is poverty and slavery that is the reason, caused by exploitation. It is not fate that shed blood. It is the laws of the Fortress of Europe. It is not fate that murdered. It is politics. It is greed.

END_OF_DOCUMENT_TOKEN_TO_BE_REPLACED

Christmas 2009 The ”White Christmas” operation in Coccaglio, aiming the expulsion of all ”illegals” out of the town, is not only a sign of utter racism and xenophobia, it also reveals the inhuman Italian asylumpolicy, which has hardened this year Therefore it is of great importance to undertake action against as well the White Christmas operation as Italian asylumpolicy in general

CHRISTMAS 2009
WHITE CHRISTMAS OPERATION IN COCCAGLIO”AND SHE GAVE BIRTH TO HER FIRSTBORN, A SON.
SHE WRAPPED HIM IN CLOTHS AND PLACED HIM IN A MANGER, BECAUSE THERE WAS NO PLACE FOR THEM IN THE INN”

On this Night before Christmas I travel with you through some Moments in the history of men, kept in a dusty archive.

YEAR ZERO
BIRTH IN BETHLEHEM
NO PLACE IN THE INN

A poor and hungry couple arrives in Bethlehem, where they had to go on order of the Roman occupier because of a people’s registration
The young woman is pregnant of her first child and has recently survived a heavy travel with a donkey, on paths of stones.
It is impossible to rest, because all inns are already filled with other people, coming for that registration
They don’t have any money to rent a room elsewhere
Out of pity, because the time of the woman has come, a friendly innkeeper gives them permission to sleep in the manger
The same night she gives birth to her first Son.
She calls Him Jesus [Joshua in Hebrew]

2001 YEARS LATER
BIRTH IN THE VICINITY OF BETHLEHEM, 2001
TRAGEDY

A Palestinian family arrives at an Israeli military checkpoint [1] at al Walaja village, near Bethlehem
They are not Joseph and Mary, but Nasser and Fatima.
They try to reach the hospital in Bethlehem, but soldiers at military checkpoints twice refuse to allow them to pass, saying that Fatima’s condition was not critical.
After trying for about one hour to pass the checkpoints, Fatima gives birth to a son, in their car.
At al Walaja, near Bethlehem
She calls him Walid

But there are medical complications
Fatima is only seven months pregnant, when the baby is born.
As a premature baby, Walid requires urgent medical treatment.
The family reaches the hospital in Bethlehem one and a half hours after he was born, but the weight and temperature of the baby are too low.
He didn’t survive
He died that afternoon [2]

A knock on the door [3]
It’s a day before Christmas
Police officials call at the home of a refugee family in Coccaglio, asking them for their residence papers.
As they learn, that the residence papers have expired, the family is asked to leave the house and the town.
Christmas Eve they leave town, towards an insecure future.

END_OF_DOCUMENT_TOKEN_TO_BE_REPLACED

CRACKS IN THE DUTCH DEPORTATION AND DETENTION REGIME

A series of hunger strikes, following allegations of abuse, force and the use of forged documents, are showing up the fault lines in the Dutch detention system.

For the first time in more than a decade, hundreds of people in Dutch immigration detention centres have gone on hunger strikes in protest at their hopeless situation. In late May, two young Guinean men moved from Rotterdam detention centre to the prison hospital in Scheveningen in The Hague, were reported to be suffering from kidney failure as a result of dry fasting. One of them, Issa Koulibaly, a 22-year-old who has written long and eloquent letters to his lawyer and supporters, explaining exactly what has been happening to him in detention,[1] states in his letters that if forced to return to Guinea, he would rather die.

END_OF_DOCUMENT_TOKEN_TO_BE_REPLACED

“Well excuse me for living!” Dutch anarchist and No Borders activist Joke Kaviaar goes on trial in Haarlem tomorrow for “incitement” for her writings over seven years slamming the racist border system in the Netherlands and across Fortress Europe. Anonymous put her site back online, and on the eve of her trial she’s released this song on youtube: