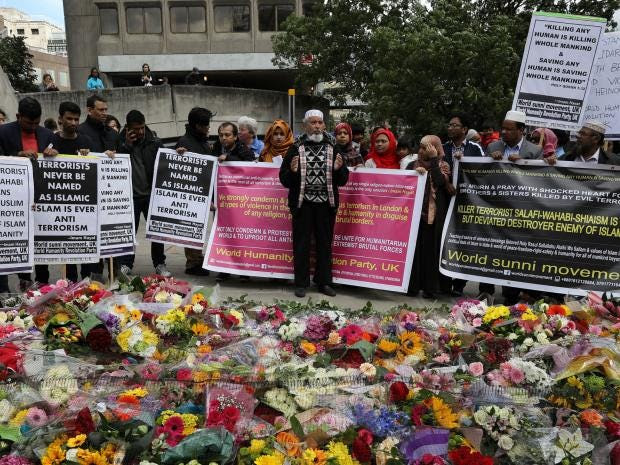 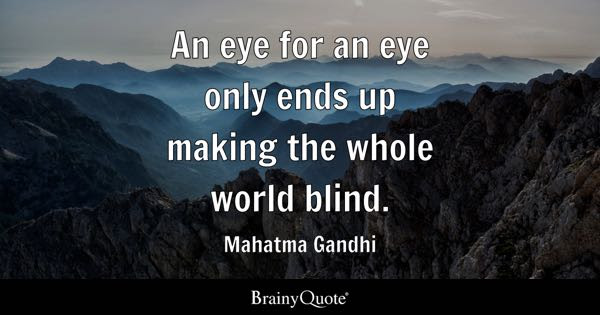 https://www.brainyquote.com/quotes/quotes/m/mahatmagan107039.html
https://www.astridessed.nl/funeral-refusal-for-london-bridge-attackersviolation-of-religious-and-human-values/
FUNERAL REFUSAL FOR LONDON BRIDGE ATTACKERS/VIOLATION
OF RELIGIOUS AND HUMAN VALUES
”AN EYE FOR AN EYE ONLY ENDS UP MAKING THE
WHOLE WORLD BLIND”
QUOTE MAHATMA GANDHI
https://www.brainyquote.com/quotes/quotes/m/mahatmagan107039.html
SHAME ON YOU!
No, I don’t mean the three London Bridge Attackers, who
recently have made at least 7 deadly victims [and now perhaps more].[1]
Because that need not to be stated:
Any terrorist attack [a military attack on civilians, with a political purpose]
is horrific, anti human and an utter violation of human values.
No, SHAME ON YOU! is directed against  the attitude of Islamic
religious leaders towards the perpetrators of the London Bridge Attacks,
for refusing to bury them.
Three perpetrators, who were killed by the police.
POLICE/SHOOT TO KILL?/NOT OKAY
Now I am all for self defence and protecting the public
[I learnt, that they started stabbing people], but my
newsinformation mentioned the police shooting 50 rounds [2] and
a question urges me:
Why that much and why deadly?
Was it not possible to hit those guys in their legs or even
knees?
Believe me, that is so painful that they can’t stab, or harm anybody
anymore.
No, it seems to me ”shoot to kill;;; and I don’t like that.
Not because they are terrorists they have no right to life.
That”s my stand.
And even when I am alone in that, I will continue to defend that.
A fair trial, a human treatment to ANYONE, however criminal.
I don’t like the statement of Labour leader
Jeremy Corbyn at all, who
said, that the police should use any means necessary to
protect the public.
He even ”complimented” the police with the quick action [3]
And they call him ”progressive”
Strange…
NO
The police is bound to use legal, human values and shoot
to kill is not one of them.
You can’t defend ”our values” [4] by violating them.
RELIGIOUS LEADERS
But the reason of this comment is the attitude
of many, too many Islamic religious leaders, who have declared
TO REFUSE TO HOLD ISLAMIC FUNERALS FOR
LONDON BRIDGE ATTACKERS
OTHERWISE SAID
”WE WILL NOT BURY TERRORISTS”  [5]
Their stand is abominable, disgusting, abhorrent as a violation
of religious values.
RELIGIONS OF LOVE AND PEACE
The Islam, as Christianity and Judaism, as all other religions and world philosophies,
represent Love, Humanity and Peace. [6]
And there is no justification whatsoever, to break with those principles
since the people addressed are ”bad”, ”criminal” or ”terrorist”
The Good Book [in all religions] say:
Love thy neighbour as yourself.
This is NOT applying to a real love or even friendship:
Some people are irritating or indeed, bad.
It means claiming for them the same human rights as
for yourself.
Meaning
Right on life, freedom of torture, freedom of want [poverty],
right on religion, a fair trial and so on.
And ultimately
The right to be buried.
It’s a shame and disgrace to refuse funeral rites, prayers or
a burial.
A religious leader is obliged to give a good example and show
assistance to anyone, spiritual and otherwise.
Let those leaders take an example to the International
Red Cross [6], that helps anyone, regardless of descent, religion
or possible criminality.
Yes, not because the London Bridge Attackers have lost
their human values, other people, here the religious
leaders, should do the same.
I wonder why those leaders take such an unworthy stand.
Do they think to be popular by the population?
I think, you have to do what’s right, not
what pleases the people.
Doing what’s right means courage, to have the courage to
say and do things, which are not popular.
But righteous.
THE BIG POLITICIANS OF THIS WORLD/
WITH BLOOD ON THEIR HANDS
WHAT ABOUT THEM?
Moreover:
In killing those people in London [however evil], are those
terrorists the most evil people in the world?
What about warcriminals like the Sudanese president Omar Bashir,
responsible for the Darfur massacres?
People like former president Bush, warcriminal in Afghanistan
en Iraq [among else]
Prime minister Blair, warcriminal in Afghanistan and Iraq.
Prime minister Netanyahu, Israeli warcriminal and oppressor
of the Palestinian freedom. [7]
All those politicians [and more], committed far more murders
and crimes.
Yet no one wll say
”We won’t bury them”
And that would not be right, too
Then why those terrorists, who [not to bagatellise
their deeds] don’t come close those warcriminals,
who are, for a part, also responsible for the rising
of political criminal movements like IS? [8]
The religious leaders should take an example
from the International Red Cross, that helps
any human being, regardless. [9]
So:
An appeal onall Islamic  religious leaders in England, who don’t want to
bury those ”’terrorists”
Regain your  humanity
and dignity and bury those terrorists, who, as we all,
have a right to humanity.
By not doing so, the religious leaders thenselves have lost
one of the most important values of Islam.
HUMANITY
‘AN EYE FOR AN EYE ONLY ENDS UP MAKING THE
WHOLE WORLD BLIND”
MAHATMA GANDHI
Astrid Essed
NOTES
[1]
THE TELEGRAPH
LONDON BRIDGE ATTACK
EVERYTHING WE KNOW
6 JUNE 2017
http://www.telegraph.co.uk/new s/2017/06/03/london-bridge-eve rything-know-far/
EURONEWS.COM
LONDON BRIDGE ATTACK: WHAT WE KNOW
4 JUNE 2017
http://www.euronews.com/2017/0 6/04/london-bridge-attack-what -we-know
[2]
”Armed officers fired an “unprecedented” 50 rounds, according to Scotland Yard.”
THE TELEGRAPH
LONDON BRIDGE ATTACK
EVERYTHING WE KNOW
6 JUNE 2017
http://www.telegraph.co.uk/new s/2017/06/03/london-bridge-eve rything-know-far/
[3]
YOUTUBE.COM
JEREMY CORBYN ON LONDON TERROR & MAY POLICE
CUTS
(04 JUNE17)
https://www.youtube.com/watch? v=pZ_bNIwCJYI
[4]
YOUTUBE.COM
JEREMY CORBYN ON LONDON TERROR & MAY POLICE
CUTS
(04 JUNE17)
https://www.youtube.com/watch? v=pZ_bNIwCJYI
[5]
THE SUN
MORE THAN 130 IMAMS AND FAITH LEADERS
REFUSE TO HOLD ISLAMIC FUNERALS FOR
LONDON BRIDGE ATTACKERS’
”WE WILL NOT BURY TERRORISTS”
7 JUNE 2017
https://www.thesun.co.uk/news/ 3741118/london-bridge-attacker s-imams-refuse-islamic-funeral s-khuram-shazad-butt-rachid-re douane-youssef-zaghbaand/
THE INDEPENDENT
LONDON ATTACK: 500 IMAMS CONDEMN TERRORISTS AND REFUSE
TO PERFORM FUNERAL PRAYER FOR ”VILE MURDERERS”
http://www.independent.co.uk/n ews/uk/home-news/london-attack -imans-no-funeral-prayers-terr orists-refuse-500-muslim-cleri cs-islam-isis-burial-khuram-a7 776861.html
[6]
ISLAM FOR CHRISTIANS
ISLAM: A RELIGION OF LOVE AND PEACE
http://www.islamforchristians. com/islam-religion-love-peace/
[7]
A
DARFUR/SUDAN
WIKIPEDIA
OMAR-AL-BASHIR
https://en.wikipedia.org/wiki/ Omar_al-Bashir
”The ICC investigations regarding Darfur focus on allegations of genocide, war crimes and crimes against humanity committed in Darfur, Sudan, since 1 July 2002.”

”2003-2006: United States and allies attacked Iraq with 13,000 cluster munitions, containing two million submunitions during Operation Iraqi Freedom, according to the HRW.[20] At multiple times, coalition forces used cluster munitions in residential areas, and the country remains among the most contaminated by this day, bomblets posing a threat to both US military personnel in the area, and local civilians”
WIKIPEDIA/CLUSTERMUNITION AFGHANISTAN/2001-2002
https://en.wikipedia.org/wiki/ Cluster_munition#Afghanistan.2 C_2001_-_2002