(Article in The Guardian)/Refugees don´t need our tears. They need us to stop making them refugees

REFUGEES DON´T NEED OUR TEARS. THEY NEED US TO STOP
MAKING THEM REFUGEES

In the desert, the smugglers lace their water with petrol so the smuggled won’t gulp it down and cost more. Sometimes the trucks they’re packed into stall crossing the Sahara; they have to jump out to push, and some are left behind when the trucks drive off again. In transit camps in Libya before the perilous venture across the Blue Desert, they play football, fight, and pool their scanty resources so an even poorer friend can pay his way. One man says his tiny wooden boat was flanked by dolphins as they made the journey, three on each side, like guardian angels, and this was what gave him hope.

These are the people we are allowing to die in the Mediterranean. The EU’s de facto policy is to let migrants drown to stop others coming. Last year nearly four thousand bodies were recovered from the Med. Those are just the ones we found. The total number of arrivals in Italy in 2014 went up over 300% from the year before, to more than 170,000. And the EU’s response, driven by the cruellest British government in living memory, was to cut the main rescue operation, Mare Nostrum. 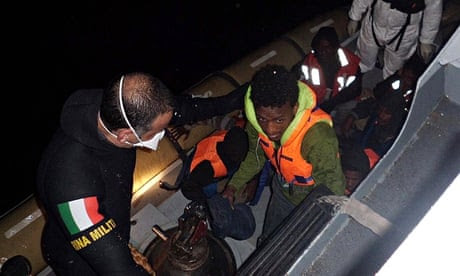 The inevitable result is that 500 people have already died this year. The figure for the equivalent period in 2014 was 15. There are half a million people in Libya waiting to make the crossing. How many more deaths can we stomach?

Migration illustrates one of the signal features of modern life, which is malice by proxy. Like drones and derivatives, migration policy allows the powerful to inflict horrors on the powerless without getting their hands dirty. James Brokenshire, the minister who defended cutting Mare Nostrum on the nauseatingly hypocritical grounds that it encouraged migration, never has to let the deaths his decision helped to cause spoil his expensive lunch with lobbyists. It doesn’t affect him.

But it does affect us. Right now we are a diminished and reduced society, bristling with suspicion and distrust of others even as we perversely struggle with loneliness and alienation. We breathe the toxic smog of hatred towards immigrants pumped out by Nigel Farage and Katie Hopkins, and it makes us lesser people.

Forget the fact that this society wouldn’t work without migrants, that nobody else will pick your vegetables and make your latte and get up at 4am to clean your office. Forget the massive tax contribution made by migrants to the Treasury. This is not about economics. Far too often, even the positive takes on migration are driven by numbers and finance, by “What can they do for us?”. This is about two things: compassion and responsibility.

Lampedusa, my play currently running at the Soho Theatre, focuses on two people at the sharp end of austerity Europe. Stefano is a coastguard whose job is to fish dead migrants out of the sea. Denise is a collector for a payday loan company. They’re not liberals. They don’t like the people they deal with. They can’t afford to. As Stefano says: “You try to keep them at arm’s length. There’s too many of them. And it makes you think, about the randomness of I get to walk these streets, and he doesn’t. The ground becomes ocean under your feet.”

Migration illustrates one of the signal features of modern life: malice by proxy

But eventually, the human impact of what they do breaks through. And in their consequent struggles, both Stefano and Denise are aided by a friendship, reluctant and questioning, with someone they formerly thought of as a burden. This is compassion not as a lofty feeling for someone beneath you, but as the raw reciprocal necessity of human beings who have nothing but each other. This is where we are in the utterly corrupted, co-opted politics of the early 21st century. The powerful don’t give a shit. All we have is us.

But equally important is responsibility. In all the rage about migration, one thing is never discussed: what we do to cause it. A report published this week by the International Consortium of Investigative Journalists reveals that the World Bank displaced a staggering 3.4 million people in the last five years. By funding privatisations, land grabs and dams, by backing companies and governments accused of rape, murder and torture, and by putting $50bn into projects graded highest risk for “irreversible and unprecedented” social impacts, the World Bank has massively contributed to the flow of impoverished people across the globe. The single biggest thing we could do to stop migration is to abolish the development mafia: the World Bank, International Monetary Fund, European Investment Bank and European Bank for Reconstruction and Development.

A very close second is to stop bombing the Middle East. The west destroyed the infrastructure of Libya without any clue as to what would replace it. What has is a vacuum state run by warlords that is now the centre of Mediterranean people-smuggling. We’re right behind the Sisi regime in Egypt that is eradicating the Arab spring, cracking down on Muslims and privatising infrastructure at a rate of knots, all of which pushes huge numbers of people on to the boats. Our past work in Somalia, Syria and Iraq means those nationalities are top of the migrant list.

Not all migration is caused by the west, of course. But let’s have a real conversation about the part that is. Let’s have a real conversation about our ageing demographic and the massive skills shortage here, what it means for overstretched public services if we let migrants in (we’d need to raise money to meet increased demand, and the clearest and fairest way is a rise in taxes on the rich), the ethics of taking the cream of the crop from poor countries. Migration is a complex subject. But let’s not be cowards and pretend the migrants will stop coming. Because they won’t. This will never stop.

Reacties uitgeschakeld voor (Article in The Guardian)/Refugees don´t need our tears. They need us to stop making them refugees